Most trains, most of the time go the way you would expect every time. However this is not so all the time. When the normal routes are being maintained the trains can be kept running, and the passengers spared a trip in a clapped out school bus, by sending them on a short (or not so short) diversion. Sometimes on secondary routes and sometimes on freight-only lines, the byways of the UK network get a promotion. Whether a line that normally only see freight trains or one where you are lucky to see anything other than a 142 railbus, 10 coach trains complete with dead electric loco and a diesel to haul it may appear.
This happens a lot on Sundays and over holiday weekends as well as occasional, but increasing, 'big bang' works that last for a week or more.
Many main line diversions are 'written in' to the public timetables, while others are announced week by week. The weekly changes are be found on the nationalrail site and on train operators websites listed on the engineering information links page.
The weekly work is collated and interpreted for the GENSHEET email list and also in text form here The list is open to all for discussions of what this weekend will bring, reports of what DID happen, advance notice of interesting diversions and general freight line and 'rare track' gen.
If you are interested in that, then check out the Branchline Society page. Members receive a fortnightly newsletter. Originally in paper form to BLS members only, but now on the internet for all is "Passenger Train Services over Unusual Lines" - listing regular passenger trains over obscure rail routes in the British Isles" (PSUL) compiled by Richard Maund from train plan data.
For international information see EGTRE by Paul Steane and the "European Gensheet"Yahoo group.

Timetable review highlighting the rare track workings of the regular service, including timetabled diversions for the current period.
Photographs and the story behind trains on rare track as examples of this branch of the railway hobby. 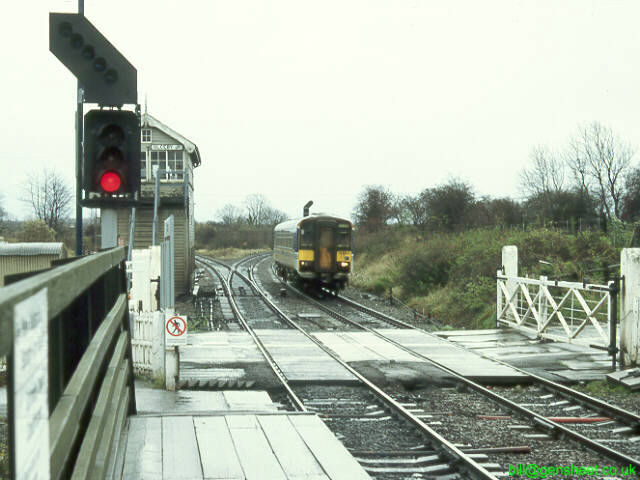 A single car class 153 approaches Ulceby from Barnetby via the normally non passenger served chord. This was due to engineering work east of Haborough. As Ulceby has only got the one platform (the normal route from Grimsby comes in as a single line seen to the left) the train had to run past and reverse back in to the platform.

The original paper based GENSHEET was a weekly newsletter of the Oxford University Railway Society, which detailed diversions extracted from weekly engineering alterations as well as items from the timetable. It was started in 1985 by Richard Walton and myself and in the years since then using timetabled and weekly engineering a substantial part of the 'freight only' railway network has been visited without recourse to deliberately routed railtours. Credit to all the editors of GENSHEET and those who helped with the 217 paper editions now surpassed by 15 years of virtual ones. Recent years have seen much improved information via operator websites and the ability to check using NR data feeds, much better than guessing from BBC Teletext. What is next ? a book.......................

As someone once said, "If a piece of track is connected at both ends it has to work eventually." Some of the ones only connected at one end occasionally do as well.